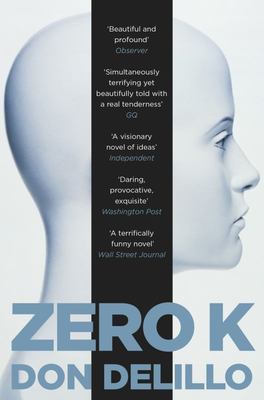 Jeffrey Lockhart has been summoned to The Convergence: a remote and secret compound where death is exquisitely, cryogenically controlled. He is there to say goodbye to his stepmother, Artis, who has chosen to surrender her dying body; preserving it until a future time when biomedical advances and new technologies can return her to a life of transcendent promise. And his healthy father, Ross, might join her. Hypnotic and seductive, Zero K is a visionary novel about the legacies we leave, the nobility of death, and the ultimate worth of 'the mingled astonishments of our time, here, on earth.'

The wisest, richest, funniest, and most moving novel in years from Don DeLillo, one of the great American novelists of our time-an ode to language, at the heart of our humanity, a meditation on death, and an embrace of life.

Both beautiful and profound, certainly DeLillo's best since Underworld, it forces us to confront the spectre of our own mortality, to ask deep questions of our motives in wishing to prolong our span on Earth. We finish the novel with a sudden recognition of the kindness of death, the balm of a bounded life Observer DeLillo is one of urban life's most perceptive chroniclers Independent DeLillo's 16th novel takes a sanguine and, as usual, perceptive look at life as it is now, beset by wars, terrorism and the catastrophic results of climate change, and balances them against the beauty and joy that can be involved in being human Daily Mail Humanly moving ... sentence by sentence brilliance of phrasing and cadence Literary Review A kind of greatest-hits compilation of earlier motifs and gestures London Review of Books Haunting... Simultaneously terrifying yet beautifully told with a real tenderness for the everyday details of life in New York... certainly not to be missed GQ Very moving ... his optimism is a welcome gift in this intense and deeply considered book Prospect A visionary novel of ideas that remembers even visionary novels are read by living, breathing humans Independent As he approaches 80, Don DeLillo is still producing work that channels America's tensions... supple and sad and oddly compassionate too; his most fully realised work in more than a decade Guardian DeLillo's spare eloquence and the cosmic depression underlying it makes this emptiest of novels a rich reading experience The Times Time has done nothing to diminish this writer's casually epigraphic style, his daring narrative choreography nor his sensitivity to the swelling fears of our age ... truly provocative' The Washington Post [DeLillo's] most persuasive [novel] since his astonishing 1997 masterpiece, Underworld ... Zero K reminds us of Mr. DeLillo's almost Day-Glo powers as a writer and his understanding of the strange, contorted shapes that eternal human concerns (with mortality and time) can take in the new millennium' -- Michiko Kakutani New York Times Brilliant in its imaginative scope The Atlantic Among DeLillo's finest work ... DeLillo sneaks a heartbreaking story of a son attempting to reconnect with his father into his thought-provoking novel Publishers Weekly Sentence by sentence, DeLillo magically slips the knot of criticism and gives his readers what Nabokov maintained was all that mattered in life and art: individual genius. Sentence by sentence, DeLillo seduces ... DeLillo has written a handful of the past half-century's finest novels. Now, as he approaches 80, he gives us one more, written distinctly for the 21st -- Joshua Ferris New York Times A return to full realization for DeLillo...Deserves to win old and new readers alike. A marvellous blend of DeLillo's enormous gifts; his bleak humour and edged insight, the alertness and vitality of his prose, the vast, poetic extrapolations are all evident. So is the visceral quickness and wit in the sentences -- Sam Lipsyte As ever, DeLillo explores the depths of an edgy, timely topic, completely resisting cliche, and emerges with something both fresh and universal The Huffington Post

Don DeLillo, the author of numerous novels, including Point Omega, Falling Man, White Noise and Libra, has won many honours in America and abroad, including the National Book Award, the PEN/Faulkner Award for Fiction, the Jerusalem Prize for his complete body of work and the William Dean Howells Medal from the American Academy of Arts and Letters for his novel Underworld. In 2010, he received the PEN/Saul Bellow Award. He has also written several plays.