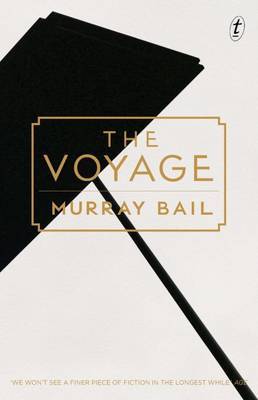 Frank Delage, piano manufacturer from Sydney, travels to Vienna, a city immersed in music, to present the Delage concert grand. He hopes to impress with its technical precision, its improvement on the old pianos of Europe. How could he not know his piano is all wrong for Vienna? Perhaps he should have tried Berlin. But a chance meeting with Amalia von Schalla brings new possibilities for Delage-connections, a meeting with her daughter Elisabeth, and dinner with an avant garde composer. Now travelling home, on a container ship, with Elisabeth, Frank Delage can begin to tell the real story. The Voyage is a masterly novel by a great writer at the peak of his powers.

"Curiously exciting: one reads in a permanent faint fever, on tenterhooks, never knowing quite where a sentence or a paragraph may veer off to." --John Banville, "The Monthly""In a quixotic narrative that zigs and zags and turns back upon itself, an esoteric exploration of passion and love, memory and ambition is revealed in pointillist fashion."--"Kirkus Reviews" ""The Voyage" is a beautiful book, sumptuously executed for all the apparent slenderness of its narrative line . . . We won't see a finer piece of fiction in the longest while." --Peter Craven, "The Age" "This intelligent and shockingly funny novel shifts and shimmers as restlessly as the various seas being crossed . . . Though concise in scale, it is vastly thought-provoking, with some inspired nods to the great Austrian writer Thomas Bernhard's final novel, "Woodcutters" . . . If ever a novel could be said to exceed the sum of its many sensations, this masterful concoction engages, excites and perturbs with singular virtuosity." --Eileen Battersby, "Irish Times" "Surprising and new . . . [Bail] meticulously fashions a past tense that's made up of various scenes of the story put together, a sort of simultaneous past, vividly present on the page and whirring and turning with the mechanism of its own ingenious making." --Kirsty Gunn, author of "Rain" and "The Boy and the Sea " ""The Voyage" is oblique, idiosyncratic and original. To read it is to breathe the rarefied air of an artistic consciousness, nostalgic for literary modernism." --Stella Clarke, "The Australian" ""The Voyage" is also about love--or rather how dislocation, memory, work, loneliness, and love whirl around in our daily experience. The surface of the novel might seem as smooth as the deck of the Romance, but that it because of its brilliant execution. Underneath, the complexities of Downunder roll." --"Metro" (NZ)

Born in Adelaide in 1941, Murray Bail now lives in Sydney. His fiction, which includes "Eucalyptus," "Holden's Performance," "Homesickness" and "The Drover's Wife and Other Stories," has been translated into more than twenty-five languages, winning a number of major awards.