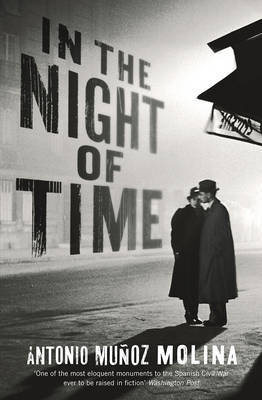 In the Night of Time

October 1936. Spanish architect Ignacio Abel arrives at Penn Station, the final stop on his journey from war-torn Madrid, where he has left behind his wife and children, abandoning them to uncertainty. Crossing the fragile borders of Europe, he reflects on months of fratricidal conflict in his embattled country, his own transformation from a bricklayer's son to a respected bourgeois husband and professional, and the all-consuming love affair with an American woman that forever alters his life. A rich, panoramic portrait of Spain on the brink of civil war, In the Night of Time details the passions and tragedies of a country tearing itself apart. Compared in scope and importance to War and Peace, Munoz Molina's masterpiece is the great epic of the Spanish Civil War written by one of Spain's most important contemporary novelists.

An immense, luminous panorama of the Spanish Civil War ... one of the many wonders of this novel is how Molina integrates the personal so closely with the political ... he brings an encyclopedic knowledge of the times to bear ... compellingly seductive Independent Exhilarating ... exceptional ... a necessary novel. Edith Grossman's translation compellingly captures its depiction of the ugliness of war and the remorselessness of human memory when many in Spain, nearly eight decades on, would like to consign the civil war to oblivion. -- Adam Feinstein Financial Times Sweeping, magisterial ... an astonishingly vivid narrative that unfolds with hypnotic intensity by means of the constant interweaving of time and memory ... Tolstoyan in its scale, emotional intensity and intellectual honesty. Economist An epic...Molina's cogent examination of war on a scale both large and small reaffirms his place as a giant of Europe's literary scene, well-worth being discovered by American readers The Daily Beast Spellbinding ... what distinguishes In the Night of Time - what makes it eye-openingly new - is its meticulous reconstruction of Spain in 1936, its attention to detail, its fusion of history and imagination, its tension between love's surrender and war's stiff resolve. Let me put it this way: Antonio Munoz Molina's novel is one of the most eloquent monuments to the Spanish Civil War ever to be raised in fiction. Washington Post What is remarkable about the book...is how much Munoz Molina manages to say about the world itself and how hypnotic his narrative becomes as he slows down time...Munoz Molina offers a force and a rare pity to the documentary evidence by his skill at orchestrating, playing tones and rhythms against each other...he approaches character with even greater tenderness, allowing for every type of weakness New York Review of Books Superb...A simple love story at one level, a broad portrait of a nation in flames at another, and a masterwork through and through Kirkus (starred review) Epic...In the Night of Time gives its subject the space it deserves and renders it vibrantly with intoxicating prose. Entertainment Weekly A War and Peace for the Spanish Civil War Publishers Weekly A large rough-cut gem of a story that lingers in one's mind. [Molina] appears to be finally getting the international attention he deserves Booklist (starred review)

Antonio Munoz Molina was born in 1956 in Jaen, Spain. After studying at the University of Granada, he began writing for newspapers and published his first novel Beatus Ille in 1986. Now the author of more than a dozen novels, amongst which are Sepharad, A Manuscript of Ashes and In Her Absence, Munoz Molina has also written for the Spanish newspapers ABC and El Pais. He has taught at the University of Virginia and CUNY and, at the invitation of Norman Mailer, at Bard College, where In the Night of Time first began to take shape. He has served as Director of the Instituto Cervantes in New York, and is the recipient of the Jerusalem Prize, the Planeta Prize and many others. He lives in Madrid and New York.